On Saturday, we welcome Airdrieonians to the Locality Hub Bayview Stadium.

Unfortunately, due to current government and Scottish Football guidelines this match is being played behind closed doors with strictly no spectators permitted.

You can, however, watch the match live on East Fife TV from the comfort of your own home. The match is included in the Virtual Element of your season ticket and pay-per-view is available for £12.50.

East Fife TV’s coverage will begin at 2.30pm where we will be joined "in the studio" and on co-commentary by former player Kenny Deuchar.

Today's scheduled League One match against Clyde has been postponed after they informed the SPFL that they would be unable to fulfil the fixture.

The full statement from the SPFL can be found here

Loans Deals Agreed for Five Members of Under 20s Squad 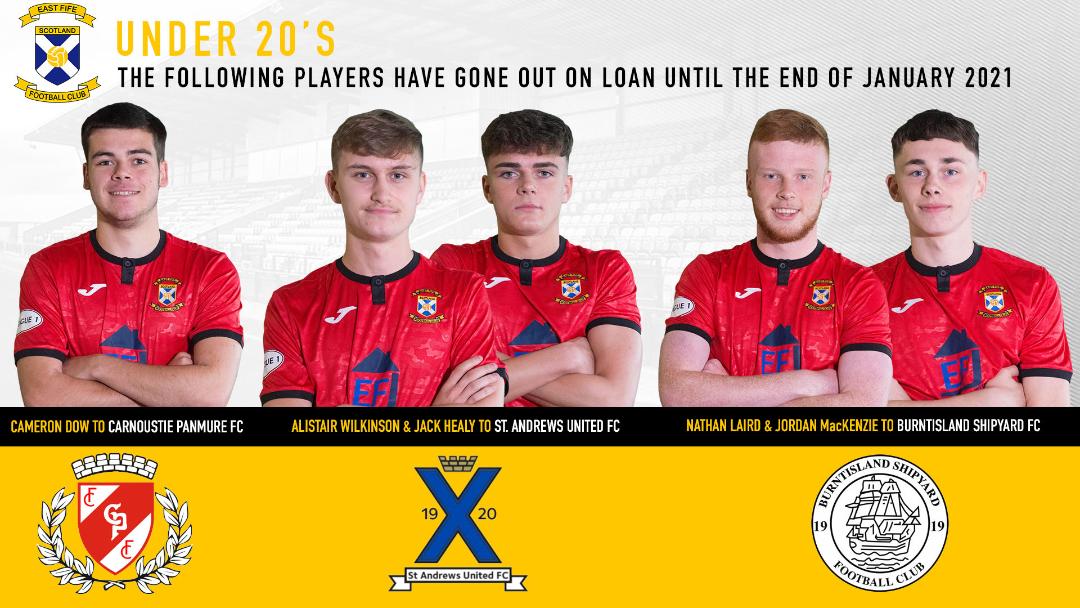 With the postponement of the Lowland Development League, East Fife can announce that five of our Under 20s squad had gone on loan until January 2021.

Left-back Cammy Dow has joined Carnoustie Panmure who play in the Scottish Junior FA East Region Premiership North league. Cammy started and scored in a 10-0 win for Carnoustie against Scone Thistle in their opening league match. Carnoustie are scheduled to travel to play Kirriemuir Thistle in the league next weekend.

Midfielders Ali Wilkinson and Jack Healy have joined East of Scotland League 1st Division Conference A side St. Andrew’s United. St. Andrew’s faced Hawick Royal Albert in the Challenge Cup yesterday with both Ali and Jack featuring in the starting XI. Losing 2-nil at half time, Jack pulled one back for his new side shortly after half time with a strike from outside the box and the Fife side drew level a couple of minutes later but Hawick grabbed the winner from the penalty spot with 15 minutes left to play. Next up for St. Andrew’s is an away match against Arniston Rangers, who sit one place below them, in the league on Saturday.

Defender Nathan Laird and forward Jordan Mackenzie have joined East of Scotland League 1st Division Conference B side Burntisland Shipyard. Nathan and Jordan both made their debuts as second half substitutes yesterday in a 4-1 loss to Kyle Bell’s Bo’ness United side in the Challenge Cup, although reports suggest the score line was harsh on the Fife side against their higher league opponents. Next up for Burntisland is an away fixture against the league’s bottom side Eyemouth United.

Darren Young: “Due to Covid it was a bit of a nightmare with the 20s not having any games we felt it was best to get them out there and get them playing until January when hopefully things change. If they do then they can get back playing together but as it is, it is best for them to be training week in and week out and getting games. Some of them did well last year and were knocking on the door. It’s down to them, they’re all good guys, so hopefully they go out, do well, keep their fitness up and try to improve and progress.”.

All the best to Cammy, Ali, Jack, Nathan and Jordan!

Josh joined the Under 20s set up last summer, making his first-team debut as a 16-year-old against Stirling Albion in the Challenge Cup in August 2019 before being promoted to the first team squad for this season.

Darren Young: “We have a lot of competition for places in the middle of the park this season so we felt it would be better for Josh’s development to go out on loan for a few months and be playing regular first-team football. It will be a good experience for him and I’m sure he’ll come back having learned a lot and be pushing for a place in the team”.

All the best Josh!

On Saturday, we welcome Dumbarton to the Locality Hub Bayview Stadium.

Unfortunately, due to current government and Scottish Football guidelines this match is being played behind closed doors with strictly no spectators permitted.

You can, however, watch the match live on East Fife TV from the comfort of your own home. The match is included in the Virtual Element of your season ticket and pay-per-view is available for £12.50.

In these ever changing and difficult times I hope that you are well and healthy?

It has been a couple of months since my last newsletter and I felt that this would be a good time to bring you up to date with events in and around Bayview.

The country’s public health issues regarding Covid-19 have meant that we have had to do a lot of work around the stadium to allow competitive football to resume at Bayview. Our volunteers have worked tirelessly to ensure that we are as Covid-19 compliant as we can possibly be under the guidance of our Covid-19 officer John Donaldson. I cannot praise them all highly enough, but my sincere thanks go to John as the paperwork involved has been massive. We have received many excellent comments from the clubs that have used our facilities so far this season and they have all been very grateful for the safe environment we have given them to use for access & changing facilities on match days.

As point of interest, those eagle-eyed viewers of this week’s game against Dumbarton will notice that the home & away changing facilities will be swapped with East Fife using the upstairs lounge and Dumbarton using the existing home & away dressing rooms. This is being done at the request of the players & management team who would prefer to have everyone in one room as the lounge permits.

Still on stadium improvements you will have noticed that our new LED floodlights have now been installed. There are still some final adjustments to be made to the positioning of each light, but these will prove to be energy efficient & long-life units which will help with the financial running of the stadium.

The league has not started as we would have hoped with two defeats and a draw, but it is early days yet. Hopefully, we will start climbing the league table soon and the Dumbarton game would be a good time to begin.

On the playing side we have been hampered with team selection due to the unavailability of key players due to injury and suspension. Saturday at Falkirk saw the second of Danny Denholm’s two match ban while Ross Dunlop, Ryan Wallace and Aaron Dunsmore returned to the squad following injury, awaiting a family member's test results, and suspension, respectively. That leaves us with Danny Swanson as our only injury worry now. He has been feeling a niggle in his groin and is to undergo a scan, but it is not expected to be a long-term injury.

The return to competitive football has also seen the full launch of our EFtv live streaming service and for the first time we can stream to viewers within the U.K. & Ireland.  I understand that there have been a couple of issues with the streams, but I would ask you to bear with us on this. EFtv is run by a team of volunteers who are doing their utmost to provide the best service possible. The issues at the start of the Montrose game, I am told, were due to trying to stream in too high a quality. I believe this was resolved after 15 minutes and that the stream for the rest of the game was excellent and I thank all the EFtv team for their efforts. We are currently awaiting delivery of a new 4K camera and are in the process of installing a dedicated broadband service to provide a more stable and reliable connection, both of which should improve the end users viewing quality.

Whilst discussing this I think it would be wrong if I did not address the matter of pricing of the match streams. As a board we decided on £12.50 for a few reasons, but mainly out of deference to our season ticket holders. Our ST holders purchased full price tickets during the close season out of loyalty and support for the Club. It was the Board’s feeling that to charge any less than the rate per match on a full priced season ticket would be wrong. I have also heard suggestions of having a ‘virtual season ticket’ for live streaming but this is not permitted under the SPFL broadcasting regulations for domestic viewers.

I have to stress that the money raised from these live stream is the only regular income the Club will receive until fans are allowed back into stadia in Scotland and is essential to the long term stability of East Fife Football Club. Whilst we are currently on a stable footing, with ongoing expenses such as staff wages and stadium maintenance costs it, that situation could change in a short space of time. I would urge as many of you as possible to take advantage of the streaming service as a means of regularly contributing to the club we all love.

As a club we have not directly asked our fans for financial help but unless we are allowed fans back into the stadium within the very near future, and that seems unlikely, that day may not be far away. The Board, as always, are actively looking at revenue streams but in the current economic situation, particularly the local area, this is proving difficult to achieve. We are very grateful to those who have contributed to Mel & Mandy’s GoFundMe page that has raised nearly £15,000 over the last few months.

Many of you will have seen and taken part in our virtual half time draw at the Montrose game. It proved to be a success and we will be running this at all future home games. Tickets for our match against Dumbarton on Saturday are now on sale from the Club Shop.

Still on financial matters, we are being careful with the use of the James Anderson money donated to all clubs via the SPFL Trust. As most of you are aware this money came with a lot of conditions on use and must principally be used for community-based projects and COVID-19 testing. Should we be fortunate enough to qualify for the latter stages of the Betfred Cup or be drawn against Premiership opposition in the Scottish Cup, then we will require to be tested before these games with substantial costs involved. We are not prepared to leave ourselves in a situation where we cannot fulfil a fixture due to being unable to afford testing and therefore will not leave ourselves short.

I do not wish to paint a picture of doom & gloom but merely wish to keep everyone informed of the current situation.

The Club needs your support more than ever and I sincerely hope that we will see you all back at Bayview soon. In the meantime, please stay safe and well.