East Fife TV's Liam Anderson caught up with new player Danny Swanson to discus his move to the club.

East Fife are delighted to announce that former, Dundee United, Heart of Midlothian, Hibernian & St Johnstone winger Danny Swanson has agreed to join the club on a 2 year deal.

Manager Daren Young is delighted to have got this deal over line and said,

"Danny signing is a massive coup for the club. We have been talking for the a few weeks now amidst interest from full time & other part time clubs but having spoken to some of our current players he was keen to come to Bayview. Danny is a Premiership quality winger and bring even more experience and creativity to our team."

The fixtures for our 2020/21 League 1 campaign were released today and we kick off the 27 game season with a trip to the Balmoral Stadium to face last season’s League 2 winners Cove Rangers on Saturday 17th October.

Our first home match sees us welcome Montrose to the Locality Hub Bayview stadium on Saturday 24th October. If fans are unable to attend, or crowd numbers are limited, East Fife TV will have exclusive live coverage of the game with all season ticket holders given complementary access to the live stream.

Forfar Athletic are the visitors to Bayview for our final home league fixture on Saturday 24th April 2021 before we round off with a trip to Firhill to face Partick Thistle on Saturday 1st May 2021.

Season Tickets for this season are now on sale from the online club shop. 2020/21 season tickets come with complimentary access to all home league matches live on East Fife TV for as long as crowd numbers are restricted. If numbers are limited, season ticket holders will be aloocated entry before individual match tickets are sold. Buy your season ticket now here. 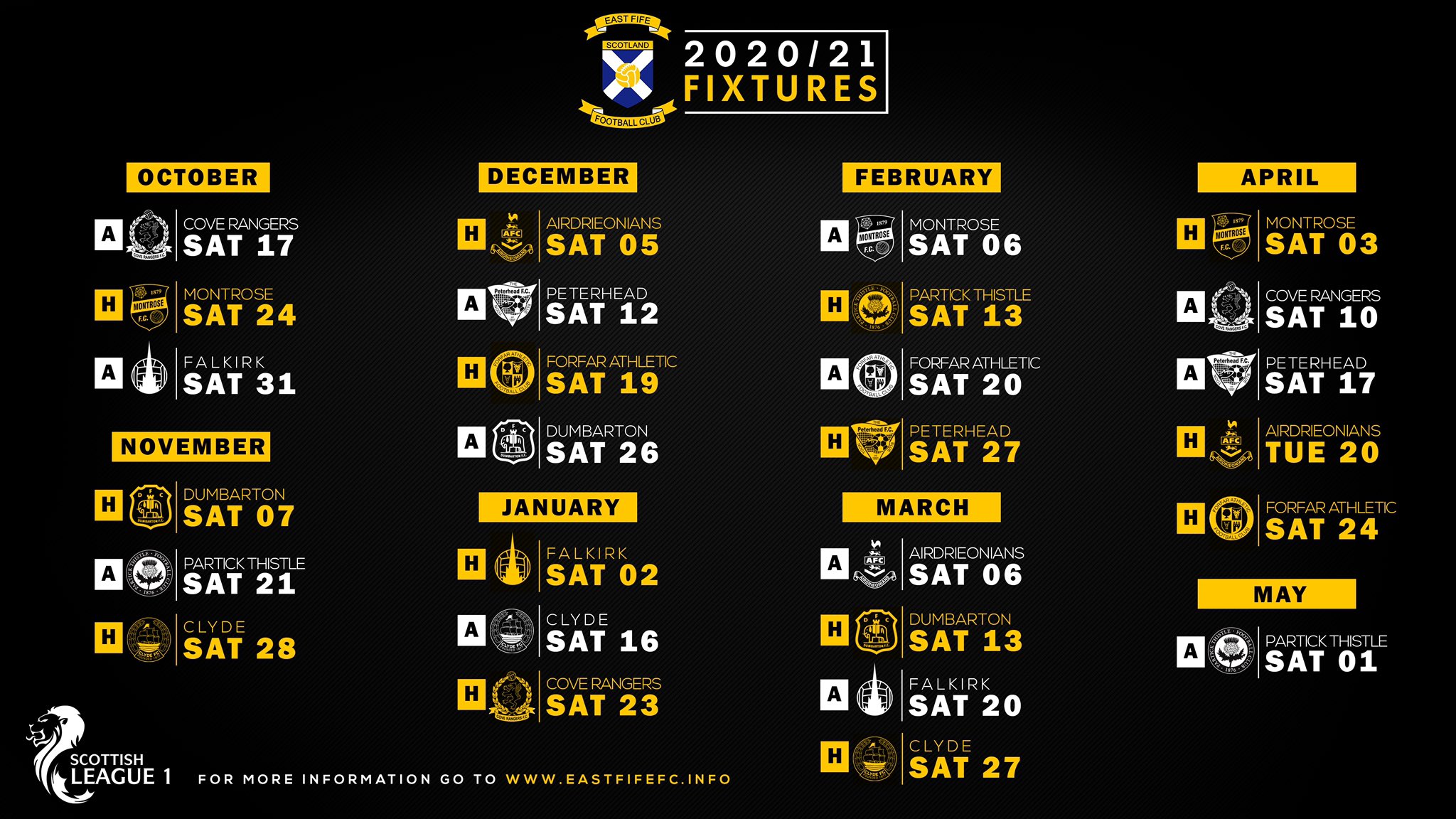 FIFERS FOR THE COMMUNITY SCIO

Fifers For The Community are delighted that East Fife Community Football Club is now back in action on the 3G surface at Bayview.

Michelle and the EFCFC committee have put in a power of work to interpret a very lengthy document issued by the SFA to ensure that all U17 groups can get back into training and limited games within the club set-up. Every step of the way the safety of players and coaches has been paramount.

The pitch has been divided into four quarters and up to 10 players and 2 coaches can train in each quarter. For the three weeks leading up to schools opening there will be around 35 x 1 hour sessions each week for all age groups and to demonstrate the commitment of the EFCFC committee and coaches there will also be a football camp every day from 1pm – 4pm, Monday to Friday and there are still vacancies.

It would be near impossible to list all the precautions which have been put in place but they include:

Prior to the opening EFCFC and the FFTC caretakers spent time deep cleaning the toilet facilities and signage with details of the one-way system, safety instructions etc was put up around the ground.

FFTC hope that the contribution from the EFCFC committee, parents and FFTC caretakers is recognised for helping to make EFCFC a set-up which can match most organisations in Scotland.

It is with great sadness that the club learned of the passing of former player and manager Pat Quinn.

Quinn began his senior career with Albion Rovers, before joining Motherwell in 1955. Manager Bobby Ancell was assembling a young side with the emphasis firmly based on free-flowing, attacking football. The team that would become known as Ancell’s Babes were taking shape with Ian St John, Willie Hunter and John Martis also arriving at Fir Park in the next two years.

1958-59 found Motherwell competing at the top of the table before the turn of the year but the young side’s challenge eventually faded, finishing in third place some 16 points behind champions Rangers. Successive fifth place finishes were obtained in the following two campaigns.

Quinn’s commanding performances at inside forward had caught the eye of the Scotland selectors and, after appearing for the Under 23 side, he was rewarded with a full cap in April 1961 against England at Wembley. Despite scoring a goal on his debut the Scots slumped to a 9-3 defeat. Quinn would however go on to make a further three appearances in the dark blue, attracting the attention of Blackpool, who paid a transfer fee of £34,000 for his services in 1962.

After just one year at Bloomfield Road, Quinn returned north of the border to sign for Hibernian. The Easter Road side were struggling in the lower reaches of league table at the time but the arrival of Jock Stein as manager in March 1964 transformed the performances on the park, and playing alongside Pat Stanton and Willie Hamilton in the middle of the park saw them challenge for the title the following season. Sadly, the lure of Glasgow giants Celtic left Hibernian looking for a new boss a year later and their championship aspirations faded.

Under Stein’s replacement, Bob Shankly, Quinn experienced European football at Easter Road, scoring a memorable goal in a famous 5-0 rout of Napoli being a highlight of his time in Leith.

In August 1969 newly appointed East Fife manager Bill Baxter agreed terms with Quinn to bring him to Bayview, significantly at the same time as he secured the signature of former Motherwell team mate John Martis.

Appropriately enough Quinn would make his East Fife debut at his old stomping ground Fir Park in a League Cup tie that ended in a 2-0 defeat. The league campaign that followed was similarly uninspiring but a Scottish Cup run that saw an appearance in the quarter finals after defeats of Raith Rovers and Morton served notice that better times lay ahead for the Fife faithful. After the departure of Baxter in October 1970 Quinn accepted the post of player-manager, going on to guide the Methil men to promotion to the top flight after a thirteen year absence. The East Fife support had a new hero with Manfred Mann’s hit “The Mighty Quinn” a terracing favourite during an unforgettable season which had the crowds flocking back to Bayview.

Life upstairs provided no shortage of entertainment. After a sticky start the men in black and gold eventually found their first division legs, beating high flying Hibernian in a memorable game in January, but a relegation struggle still ensued. A Joe Hughes goal at Fir Park on the last day of the season finally kept East Fife up at the expense of Dunfermline Athletic.

The Fifers finished in ninth position the following season, their highest since 1953-54, qualifying for the Texaco Cup and reaching the quarter finals of the League Cup after knocking out holders Partick Thistle.

Unfortunately, following a difficult start to the 1973-74 campaign there was a parting of ways for Quinn and East Fife, a season that was not to get any better for the Methil men, culminating in relegation and bringing an end to what remains the club’s last period in the top flight of Scottish football.

Following spells of coaching in Iceland and Scotland, Pat Quinn received a standing ovation on his last visit to Bayview in November 2013 accompanied by the heroes of the 1970-71 promotion squad. For those of us fortunate enough to remember that season he will always be “The Mighty Quinn”.

East Fife Football Club would like to pass on our sincere condolences to Pat’s family and friends at this sad time. 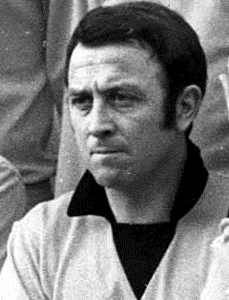 We're pleased to announce our season ticket prices for 2020/21 as follows: 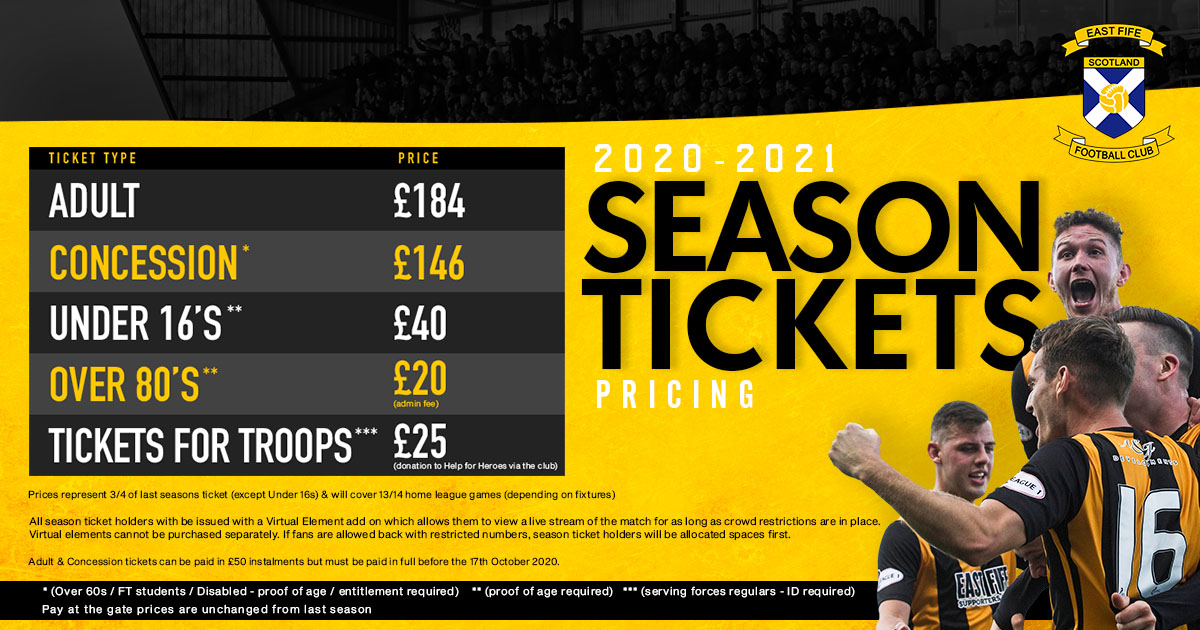 As everyone is aware, this season is going to be very hard for all clubs and we are no exception. That being said, we are acutely aware that it is the same for you our loyal fans. With that in mind we have decided to keep the walk-up admission prices the same as the last 3 seasons and also peg the season ticket prices at the same level as last season.

Unfortunately, until the final fixtures are released, we do not know if we will have 13 or 14 home league games. This will ultimately affect our income for the season therefore the prices are based on three quarters of the full season.

The child season ticket has risen from £20 to £40 but this still represents a 40% reduction of the walk-up prices.

In event of the season starting behind closed doors, ALL season ticket holders will be provided with ‘free’ access to EFtv’s live streaming of home games. This will apply until the U.K. & R.O.I. broadcasting restrictions are reintroduced by the SFA. I know that the EFtv media team are already working on ways of improving their already excellent service to ensure that you can get the best possible coverage. It is hope that fans will be allowed into games by the time we start but should numbers be restricted then season ticket holders will be allocated entry before any individual match tickets are sold.