George's funeral will take place on Friday, 3rd January at 11.45am at Kirkcaldy Crematorium.

Donations in lieu of flowers may be made to Ward 43 Victoria Hospital.

It was with a heavy heart that I received the news that we had lost an absolute club legend in George Dewar.

George was also a friend of mine, which was great because he was one of my heroes growing up. We recently had George at Bayview which was an absolute pleasure. I know that George still took an interest in the club as, when we met, he always asked how things were, however most recently his time was taken up watching his grandson Louis [Appéré] playing for Dundee United. He was very proud of Louis and always kept as up to date with his progress.

I, for one, will miss George as I’m sure everyone connected to the club will as well.

Yours in Sport George 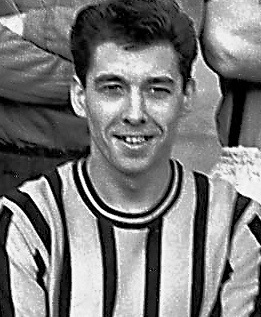 It is with great sadness that we learned of the passing of club legend and record post war goalscorer George Dewar this morning after a short illness.

Two years he was invited back to Bayview by Charlie McCaig, and put pen to paper in November 1960.

Five months after signing the 23 year old made his first team debut at home to Stirling Albion. Dewar wore the number seven shirt in a game that ended in a 1-0 defeat and retained his place in the side for the remainder of the season, opening his scoring account two weeks later, finding the net twice in a 4-2 defeat of Forfar Athletic at Bayview. The youngster’s performances offered a ray of hope for the supporters who had witnessed a calamitous fall in the club’s standing in Scottish football in recent years.

1961-62 started with a bang as the Fifers won all six of the League Cup sectional ties with Dewar hitting four goals in an 8-2 win at Brechin, following this up with a hat trick at home to Arbroath four days later in a 6-0 success. A quarter final tie with Rangers was earned after Albion Rovers were seen off in the supplementary round. Although both legs against the Ibrox side ended in a 3-1 defeat Dewar’s performances had caught the eye, scoring in each game. Despite being unable to reproduce their cup form in the league, the Methil men did manage a mid-table Division Two finish, an improvement on the previous two campaigns. Dewar finished top scorer with 31 goals having forged a productive partnership with fellow striker Ian Stewart and goalkeeper-come-striker George Yardley.

Dewar continued to hit the target regularly the following season, finding the net on 24 occasions, including four goals in a 5-0 Scottish Cup win over Edinburgh University but the continued lack of league success saw Charlie McCaig replaced as manager by Jimmy Bonthrone in April 1963. Bonthrone made an immediate impact, with East Fife reaching the quarter finals of the League Cup, once again being paired with Rangers. It was a much closer affair this time around with Dewar’s second half equaliser earning a 1-1 first leg draw in front of a 14,000 Bayview crowd. A 2-0 defeat followed at Ibrox but perhaps more importantly, performances in the league were showing marked signs of improvement, notably a 3-1 home win against eventual runaway champions Morton. Dewar notched the second goal in a victory that brought the Greenock side’s record breaking 23 successive wins to an end. Fourth position was achieved at the end of a season with ever present Dewar finishing top scorer on 34 goals.

From a league perspective 1964-65 was disappointing but the 9th place was compensated by another quarter final appearance in the League Cup and a remarkable 2-0 first leg defeat of Celtic at Bayview. Unfortunately a defensive collapse at Parkhead resulted in a 6-0 reverse and no place in the semi final for the men from Methil. In the Scottish Cup East Fife created another upset after holding Aberdeen to a goalless draw at Pittodrie. A 27th minute goal from Dewar was enough to see off the Dons in the replay. Kilmarnock, the side that would go on to lift the First Division championship that season, were just too good for the Fifers in the next round although it took another replay before the Ayrshire team progressed with a 3-0 win at Rugby Park.

The following two seasons saw the Fifers finish six points short of a promotion place. For the fifth successive year Dewar finished top goalscorer in 1965-66 but the next campaign found him on the sidelines through a knee injury requiring an operation in December 1966, causing him to miss out on another Scottish Cup shock, a 1-0 success away to Motherwell. Manager Bonthrone continued to bring in fresh blood in his efforts to return to top flight football, signing the experienced Bobby Waddell in addition to youngsters Bertie Miller, Walter Borthwick, Peter McQuade, Dave Clarke and Dave Gorman. A third place finish was achieved in 1967-68, four points behind runners up Arbroath, with top scorer Dewar also receiving the accolade of club player of the year. The goal of promotion continued to elude East Fife in the following campaign, again missing out by one place in Jimmy Bonthrone’s last season in charge, Bill Baxter taking over the reigns after Bonthrone’s appointment as coach at Aberdeen in April 1969. For a club record seventh time Dewar ended the year as top scorer.

1969-70 was to be Dewar’s farewell season at Bayview Park as a player. He found the target for the last time in November 1969 at East Stirlingshire and played his part in a thrilling Scottish Cup run which saw Raith Rovers and Morton being knocked out before losing narrowly Dundee in the quarter final. His final appearance wearing the black and gold was away to Brechin City in April 1970. After 334 starting appearances and a post war record 193 goals for the club, Dewar elected to hang up his boots and was awarded a testimonial match against Stoke City in November 1970 which attracted a 6,000 crowd.

George Dewar had two spells as coach with East Fife, assisting Pat Quinn in bringing top division football to Methil after a 13 year absence in 1971, and working with Dave Clarke in 1978-79. A successful businessman, he continued to retain strong links with the club, and in 2008 was voted into the pre-1970’s All-Time Greats team.

Former teammates Peter McQuade and Bertie Miller  on learning of George’s passing wanted to add their own personal tribute.

"As young players we both found George to be a great team mate and first team coach. He was one of the senior players, but always took the time to advise us about what was required to make it as a professional footballer. He lead by example. On the coaching front he kept it simple, and was very big on the need for the best physical conditioning. A quiet but very assertive man."

East Fife Football Club would like to extend our sincere condolences to George's family and friends at this difficult time.

Josh joined from Fife Elite and made his first team debut in the Tunnock’s Caramel Wafer Cup against Stirling Albion in August. Josh is also Captain of the Dundee Schools Team. Liam joined in November from Kennoway Star Hearts, first featuring in our Fife Cup match v Dundonald and he been part of the last couple of first team matchday squads. Liam is Captain of the Fife Schools Team.

There were no jackpot winners and no runners-up.
The new jackpot is £6,400 and the draw will take place on Wednesday 18th December 2019 at 1pm in Cook's Cafe, Methil.

Important Travel Info for Fans Heading to Stranraer on Saturday

There is a planned road closure on the A77 south of Ballantrae this weekend. The diversion route, via Newton Stewart, will add around 30-45 minutes on your journey.