Manager of the Month Award for Darren Young 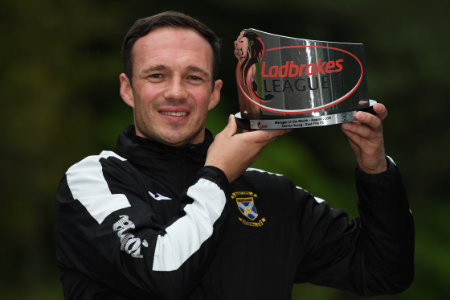 Congratulations to Darren Young who has picked up the Ladbrokes League 1 Manager of the Month award for August after an unbeaten start to the season.

The month started with a 1-1 draw in our League 1 opener away to newly promoted Clyde where a second half goal from Anton Dowds cancelled out an early opener from David Goodwillie from the penalty spot.

That was followed up with another 1-1 draw against last season’s League 2 Champions Peterhead at the Locality Hub Bayview Stadium. Derek Lyle had given the Blue Toon the lead in the 34th minute before Ryan Wallace levelled the match shortly before half-time. East Fife were the dominate side throughout the second period but were unable to find a breakthrough.

Next up was a clinical 4-1 victory over Airdrieonians on 24th August at Bayview. Ross Davidson gave the home side the early lead when he capitalised on a slip from Diamond’s ‘keeper David Hutton to stoke the ball home from 30-yards before Liam Watt doubled the lead with his now trademark goal, cutting in from the left & curling a strike into the far corner. After the break, Aaron Dunsmore added goal number 3 with a well-worked move down the right & Scott Agnew completed a clean sweep for the midfield 4 with a strike from 20-yards. Airdrieonians pulled a goal back in stoppage time through Calum Gallagher.

The month ended with a resounding victory in the Fife Derby over Raith Rovers. Jamie Gullan had put the visitors ahead after taking advantage of a short pass back to know the ball into the empty net before from then on East Fife were by far the better side. Anton Dowds equalised almost immediately after good work from Ryan Wallace. Chris Higgins added a second after half-time and Wallace a third when he got on the end of Agnew’s free kick. Raith pulled a goal back with 6 minutes to go to set up a nervy finish but Agnew made sure of the points 6 minutes into injury time with a strike from 10-yards.

This is Darren’s second Manager of the Month award while at East Fife after picking up the same accolade in last September after guiding the side to 5 wins out of 5 in all competitions during an impressive run of 8 wins in a row.