East Fife supporters will be in Sections A, B and C in the main stand.
Admission prices are £16 Adults, £10 Concessions & £7 under 16s.
Please note that Concessions are over 60s, students & disabled.
Disabled & Carer Tickets are £10 in total & these should be pre-ordered.

Fifers make it 6 wins in a row

East Fife kicked off 2017 with a hard-fought 1-0 over Stenhousemuir thanks to a 22nd minute Scott Robinson goal. Manager Barry Smith made two chances to the side that dispatched Livingston with Scott Mercer and last week’s goal hero Jamie Insall replacing Jordan Austin and the injured Kyle Wilkie. Kevin Smith and Chris Duggan took their places on the bench after long injury layoffs.

Robinson had an early chance to open the scoring when he played in by Pat Slattery but Warrior’s ‘keeper Colin McCabe was out quickly to block. Both teams were struggling to get a foothold in the game however the home side took the lead on 22 minutes. Kevin O’Hara, playing his last match for East Fife, sent a looping ball over the Stenhousemuir defence and Robinson was able to out muscle Ross Meechan to guide the ball past McCabe.

The visitors best chance of the first half fell to Willis Furtado who cut in from the right and was unlucky to see his shot rebound off the post with the ‘keeper beaten. East Fife had a penalty claim waved away on the stroke of half-time. Mercer’s cut back was saved by McCabe but Insall was unable to get on the end of the rebound after being held back by David Marsh.

East Fife started the second half on the front foot and had a few chances to add to their lead. Excellent work by Ross Brown on the right saw him pick out O’Hara 20-yards from goal but his right-footed shot curled just past the post. O’Hara was involved again 5 minutes later when he took the ball past the on-rushing McCabe but the Stenhosuemuir defence were on-hand to clear for a corner before Insall fired narrowly off-target from a James Penrice cross.

As the game entered the final 10 minutes Stenhousemuir pressed for an equaliser with Alan Cook forcing Mark Hurst to turn the ball over the bar with a powerful strike from 20-yards. Stenhousemuir did have the ball in the back of the net but the whistle had blown for a foul on Jonathan Page by Marsh, a decision that left the visitors justifiably fuming at the final whistle.

After the match Barry Smith spoke to East Fife TV:

“We’ve played better since I’ve been here but the important thing was that we got three points. We had to grind out the three points today, which the boys did, and that’s credit to them for working as hard as they did. Don’t get me wrong, Stenhousemuir put us under a lot of pressure and maybe deserved more from the game. When you’re not playing well but come away with a 1-0 win you’ve got to be pleased.”

“It’s not just the defence; it’s the whole team working hard to prevent teams from getting opportunities. So for as much as the defence and the keeper, who has had a great save late on in the game, are doing well you’ve got to hand it to the whole team for the work that they’re putting in to get the results that we’re getting.

Highlights from Saturday's win against Stenhouemuir are now available on EFtv 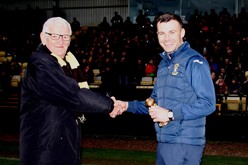 Kevin Smith being presented with an award for his 100th game for the Club by Dave Marshall, Vice Chairman of the Club, recently. 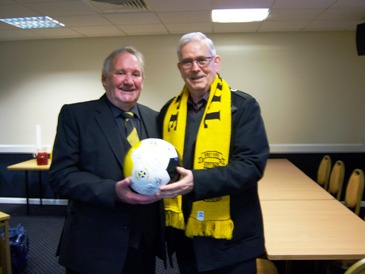 The matchball sponsor on Saturday, versus Stenhousemuir, was Thomas Herriot of Mid Calder. The photo shows Mr Herriot being presented with a signed ball after the match. Mr Herriot, although he lives in the Lothians, is a long time East Fife Supporter along with relatives from Buckhaven. He said that he really enjoyed himself and of course, the result!

Supporters' Club Presentation to The Club. 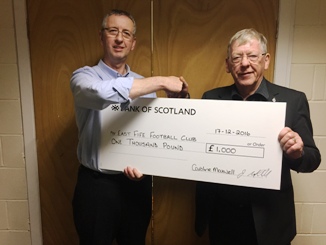 The Club is very grateful to East Fife Supporters' Club for its generous donation. Above is pictured Jim Mitchell presenting John Barclay, Director, with a cheque for £1,000.00 recently.