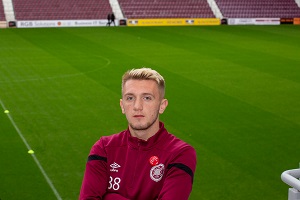 We’re delighted to announce the signing of midfielder Callumn Morrison on loan from Heart of Midlothian until the end of the season.

20-year-old Callumn joined the Tynecaste side in 2015, making his debut in a Premiership match against Partick Thistle that year. Callumn joined League 2 side Stirling Albion on loan for the 2016/17 season before returning to the Binos at the start of the following season where he scored 8 goals in league 16 appearances. He moved to Brechin City on loan for the second half of the 2017/18 season.

Callumn broke into the Hearts first team last season and went on to make 35 appearances for the side, 20 as a starter, and scoring his first goal in a 2-0 win over St. Johnstone last January. Callumn has 3 Scotland caps at Under 17 level and was called up to the Under 21 squad at the start of last year.