Duggan Heading Down Under 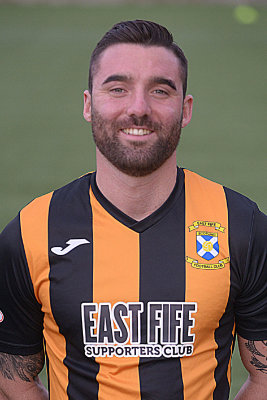 We can confirm that Chris Duggan will depart Bayview at the beginning of January as he heads back to Australia in January to take up a new career.

Chris originally joined East Fife in the summer of 2016 but injury restricted him to only a handful of substitute appearances during the first half of the season. However, he found the net on 7 occasions in 18 appearances during the second half of the 2016/17 season including a double against St. Mirren in the Scottish Cup & another brace in a 2-nil victory over Albion Rovers in March 2017.

2017/18 saw Chris feature in all 44 of league & cup matches racking up over 3600 minutes (the highest of any member of the squad that season). He found the net on 15 occasion & picked up numerous awards at the end of season Player of the Year Dance including Player of the Year and Top Goalscorer.

Chris left the club at the end of the 2017/18 season to step into full-time football but returned at the start of this season however injuries have limited him to just 5 starts and 7 substitute appearances during this campaign but did score the equalising goal as we drew with Premiership side Heart of Midlothian in the Betfred Cup before beating them on penalties to secure the bonus point.

Chris spoke to East Fife TV following Saturday's match: "I've had a lot of highlights. The first year under Darren Young was personally one of my best but this season there has been unfortunately a lot of injuries and it's been a bit stop/start. The Hearts game was a highlight at the start of the season but it's all been great I've enjoyed my experiences, it's the reason I came back this year. I can't everyone at the club enough for what they've done over the few years".

Everyone at East Fife would like to thank Chris for his efforts during 2 and a half years at the club & wish him all the best for the future.