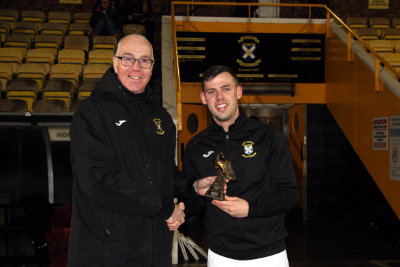 Congratulations to Aaron Dunsmore who made his 100th East Fife appearance on Saturday.

Dunsy joined the club in the summer of 2017 after leaving Hibernian and made his debut against Peterhead in the League Cup in July that year. His first goal came against Albion Rovers in December and that was followed by further goals again against Albion Rovers in February and Queen’s Park in April 2018. In total, Aaron featured on 39 occasions during his first year at the club, scoring 3 goals, and rounded off the season by picking up the Young Player of the Year award at the Player of the Year Dance.

2018/19 saw Aaron move further up the park to the right-hand side of midfield, missing only 4 matches as he added 43 appearance and 5 goals to his East Fife tally. One of the highlights of last season was his last-minute winner in the Fife Derby in November which ended a run of 31 years without a victory against Raith Rovers, a goal which, unsurprisingly, was voted Goal of the Season.

So far this season, Aaron has 19 appearances to his names and 4 goals, including a double against Montrose in September.

Aaron was presented with a trophy to mark the occasion by Player Liaison Director Liam Anderson before last night’s match against Clyde.