The club was saddened to learn news of the passing of former player Dick Smith.

Born in Perthshire, Smith moved to Methil as a 23 year old in April 1963 from Newburgh, making his debut at Cappielow Park against a high flying Morton side in front of an 8,200 crowd. The 5-0 defeat turned out to be the penultimate game in charge for manager Charlie McCaig, who was replaced by former player Jimmy Bonthrone, who handed Smith the number nine shirt for his first home game a week later. It turned out to be quite an occasion under the Bayview lights as Smith scored the only goal of the night with five minutes remaining to secure a win against Stranraer.

The following season saw Smith mostly occupying a full back position, with the Fifers reaching the quarter finals of the League Cup, drawing with Rangers 1-1 in the first leg watched by a 14,000 Bayview crowd before going down 3-1 at Ibrox the following week.

The league campaign was notable for a 3-1 victory against a Morton side that had won a remarkable 26 consecutive games with Smith featuring on the left side of defence. Bonthrone’s men finished in a much improved fourth position at the end of season, but for Smith after 31 appearances and 7 goals for East Fife, it was farewell as he emigrated to Australia, where he would turn out for Sydney side Hakoah.

Dick Smith later returned to Scotland and will be remembered a successful businessman and a popular figure in junior football circles. Everyone at East Fife Football Club would like to pass on our condolences to Dick's family and friends. 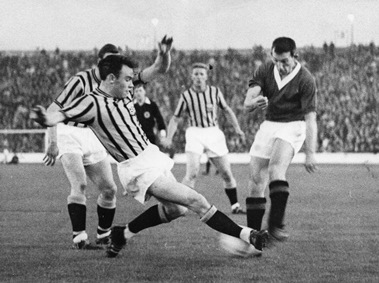 Dick Smith in action against Rangers at Ibrox