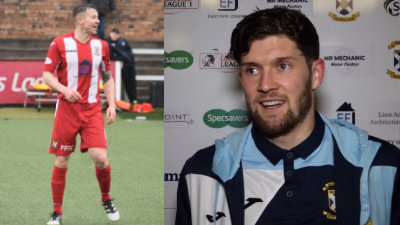 We’re delighted to announce that we’ve agreed terms with Chris Higgins and Stewart Murdoch to return to the club next season.

Chris started his senior career at Clyde in 2005 and was part of the side who knocked Celtic out of the Scottish Cup the same season before going on to make over 100 appearances for the club. He moved on to Dunfermline Athletic in 2009, then Queen of the South where, as Club Captain, the Doonhamers won the Scottish Second Division title and the Scottish Challenge Cup in the 2012/13. Chris left to join Ayr United at the start of the 2017/18 season when they won the Scottish League One title.

Chris featured on 12 occasions last season after joining on loan from Ayr United in February.

Stewart started his career at Falkirk, coming through their youth academy, and enjoyed loan spells at both ourselves and Berwick Rangers. He moved on to Fleetwood Town in 2013 and then Ross County in 2015 before joining Dundee United in 2016.

Stewart made 27 appearances, scoring 1 goal, during his first two loan-spells at the club between February and October 2010 but injury limited him to only 5 appearance last season.

Great to have you both back for next season!