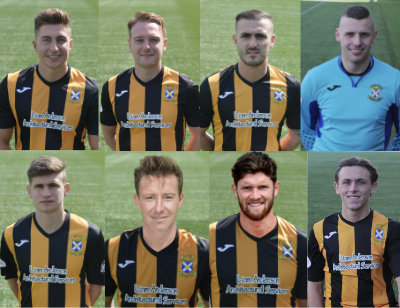 We can confirm that Jonny Court, Chris Kane, Scott Linton and Daniel Terry will be leaving the club when their contracts expire in June.

Chris signed on at Bayview in May 2016 after leaving Cowdenbeath and went on to become a key member of the defence during his first season which saw him pick up the Directors Player of the Year award that year. Chris leaves with 81 East Fife appearances to his names and 5 goals.

Scott joined the club in the summer of 2017 from Clyde and became somewhat of a set-piece specialist with all 4 of his East Fife goals coming from dead ball situations (3 free kicks and 1 penalty). Scott has featured for East Fife on 44 occasions.

Daniel joined in January 2019 and made his debut in March as a replacement for the injured Brett Long before keeping a clean sheet on his only start for the club a few days later.

East Fife Football Club would like to thank each of these players for their contributions throughout their time at Bayview and wish them every success in their future careers.

Manager Darren Young and his backroom staff are looking to as to the squad and we will keep you informed as soon as the details are confirmed.