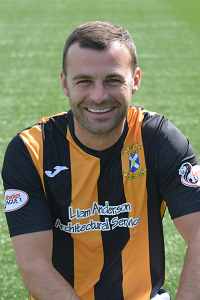 We’re delighted to announce that Club Captain Kevin Smith has agreed to extend his stay at Bayview for another year.

Kevin joined the club in January 2014, initially on loan, from Dumbarton and made his debut against Forfar Athletic the same month. He was appointed Captain for the start of the 2015/16 season and guided the team to the League Two title that year.

To date, Kevin has 177 East Fife appearances to his name (34 so far this season) making him the club’s longest serving player. He has scored on 40 occasions for East Fife, 8 of which have come this season, including a goal of the season contender in a 2-0 victory against Queen of the South in the Irn Bru Cup.